McLaughlin’s 2020 championship win sealed a ‘Three-Peat’ of consecutive driver’s championships for both him and the team in what is the 10th drivers championship for DJR/DJR Team Penske in the 40th Anniversary for the team.
In claiming such a historic milestone, McLaughlin became the 1st Ford driver to win three straight championships since Ian Geoghegan won four in a row from 1966-1969 and only the 4th driver in history to claim the feat, joining Mark Skaife, Jamie Whincup and Geoghegan in the record books.
This model will be based on the 2020 Bathurst 1000 livery where McLaughlin was officially crowned the champion.
It is scheduled to be produced by Authentic Collectables in high quality sealed body resin with clear windows and detailed interior in a limited edition with an individually numbered Certificate of Authenticity along with a scale replica Championship trophy and winners boards. 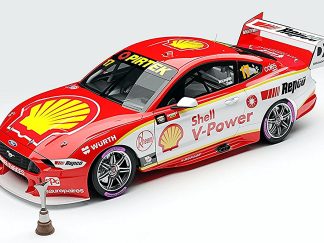