The car show is as American as apple pie. Chrome engines, wild paint jobs, and pure customization at it’s best. There was no time better than the early 50’s and 60’s to be apart of the scene. ACME would like to introduce a little slice of that time period with it’s all new Grand National Duece Series! This series will be a tribute to those early days of car shows, where high glitter paint jobs, chromed out parts and wild interiors ruled the world. This will be a six car series with Highboys, Roadsters, three windows and five windows with some great parts to boot. Each release will be wildly different and there will even be some new parts added in the mix as the series continues! This will be the coolest diecast series yet! Our first release in the line up is a full fendered five window decked out in Lemon Cosmic Dust paint. The details will show thru as you look at the custom pinstriping, chromed out parts and beautiful interior complete with custom piping throughout. This series will surely be an instant sell out so please make sure to get your orders in today! This is the 1st release in the all new 6 car series from ACME! 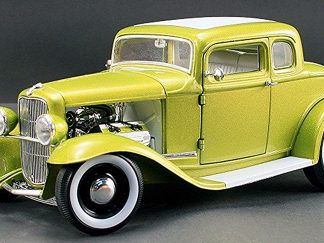