It had been a long time passed since Sonny had seen his Uncle Elmer and he wuz shore glad to have him back in Pine Sap. After vittles they set on the back porch with a couple of jars of shine and Sonny was right curious about PC’s start up in running shine. Uncle Elmer began, “First thang you gotta know is that times wuz hard here and your daddy was hell bent on making money to take care of ya’ll.”

“We all knew that PC could drive the doors off of anything. So he’d figured he could make some folding money at the Pine Sap dragstrip to help get the shine business started. He’d heard bout a tuff feller over in Barrow County who wuz looking to dump his 41 Gasser cause the law had started to close in on him. So PC met up with this fella and looked over the gasser and started talking money and made a deal. Now the gasser was in rough shape. It had been sittin a spell and needed some love, but your daddy wasted no time in gettin it ready to race. He patched up the worst rust spots, cleaned up the interior and then pulled out the ole worn out engine and shoved in a monster injected HEMI! Now don’t go askin me how he got his hands on that HEMI, boy. Anyway, that is how your daddy wuz able to start moonshinin. Whippin every car at the dragstrip with that ole 41 Gasser that he called ALKY HAULER.” 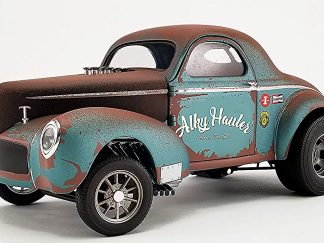