American company Greenlight Collectibles has announced a line-up of replicas based on cars featured in the Twilight Saga of books and movies. The range will feature a 1/18 scale diecast reproduction of Bella’s 1953 Chevy Pick-up Truck alongside 1/18 scale diecast replicas of Charlie’s Forks Police Department Ford Crown Victoria police cruiser. Charlie bought Billy Black’s truck for Bella when she decided to move to Forks to live with him. It was a gift to show his appreciation for her moving in. Bella was hesitant to like it at first, worried that it would cost too much money to keep up and that it might be in bad condition, but as soon as she saw it, she knew it was perfect for her. It’s described as a 50’s-60’s faded red/orange truck, bought by Billy Black in the 80’s and frequently repaired by both himself and Jacob. Billy didn’t want to sell it, but lost his need for it when he became disabled. On Stephenie Meyer’s website, it is said that her truck is a 1953 Chevy Pick-up truck. 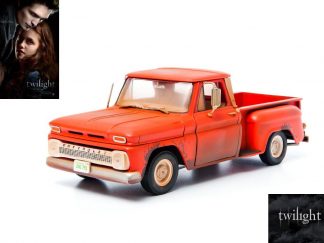