The Commodore nameplate has been a dominant icon of Australian motorsport since its first touring car racing appearance in 1980, and in 2019 it celebrated the significant milestone of claiming its 500th championship race win.

Never before attempted, this 360 page, hardcover, limited edition collector’s book by award-winning author Aaron Noonan along with respected journalist Will Dale and publisher V8 Sleuth will include over 500+ photos, featuring every championship race-winning Commodore and much more.

Hot on the heels of last year’s sold-out ‘Holden at Bathurst: The Cars: 1963-2017’ and the previously released award-winning ‘Holden Racing Team, The Cars 1989-2016’ releases by the same author, this book will also be a limited edition collector’s release and is bound to be very popular – so don’t miss out!

Rare and never-before-published photos of every Holden Commodore to win a championship race in the Australian Touring Car Championship / V8 Supercars / Supercars Championship series since 1980.

Every winning car will be beautifully presented with a very impressive amount of data featured including:

Be produced in a numbered limited edition

All of the iconic cars, teams and drivers to have ever won a championship race in a Commodore

Australian-made and printed in Australia via green printing methods, this book is a must-have for the collection of any Holden, motorsport, motoring or automotive enthusiast.

Currently scheduled to arrive in October/November 2019, this book can’t be missed.

Please note: Concept artwork pictured, may be subject to change. 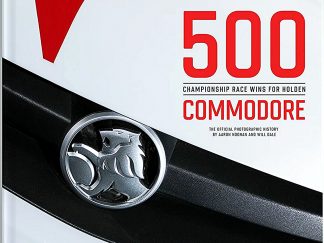