This model has fully opening doors, bonnet and boot.

The year is 2006 and Lowndes is one of the two cars in contention for the V8 Supercars Championship. After a sensational Bathurst victory earlier in the season, Lowndes’ hopes of a fourth Championship would come down to Phillip Island and a head-to-head battle with Rick Kelly. The pair entered the final race of 2006 even on points. Both drivers endured a tumultuous and controversial race with Kelly in 18th place finishing ahead of Lowndes in 29th place and ultimately claiming the 2006 Championship.

The Vodafone logo is in the “O”, and it’s been spelt that Lnowdes to advertise the Vodafone ” making the most of now” promotion.

Its promoting the NOW (L NOW des) phrase from Vodafone which is 888’s new sponser for next year. You can also notice the vodafone logo in the O. 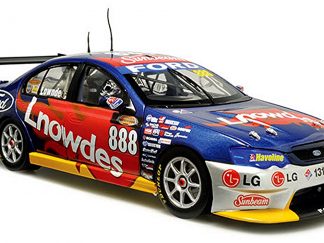