There was a time in the 1980s when it would have been unthinkable that Peter Brock could go from being a Holden hero to driving a pesky BMW in the Australian Touring Car Championship. But it happened in 1988, after a much-publicised fall out between Brock and General Motors Holden that left the sport’s biggest name looking for new manufacturer options at the end of 1987. In theory, Brock’s option was a very good one as he took over the BMW M3s and hardware of the JPS team run by Frank Gardner, who had won the previous year’s ATCC with Jim Richards. Brock retained the backing of Mobil 1 and BMW Australia continued its support of the program, while Brock and Richards reunited as teammates again after winning three Bathurst 1000s together between 1978 and 1980. The package looked strong on paper, but it was to be a tough season as the ever-developing Ford Sierra RS500s hit their straps and the little 2.3-litre, four-cylinder, left-hand drive M3 was found wanting in the battle for the ATCC.

At Calder for the opening round Brock qualified 3.2-seconds adrift of Dick Johnson’s Shell Sierra, an eternity on a circuit of just over two kilometres. Brock finished sixth ahead of Richards in the race, with both cars a lap down on race winner Johnson after suffering clutch problems. This season opener was one packed with controversy for the Mobil team. Both cars raced gaining no championship points or prize money given they did not comply with regulations requiring them to race with standard-based inlet manifolds.

After finishing fifth and again being lapped by Johnson at Symmons Plains, Brock was more competitive at the tight Winton circuit, where he harassed Colin Bond’s Sierra for third until the M3’s Bridgestone tyres had enough and Brock was forced to make an unscheduled stop. He eventually charged back to finish seventh. Perth’s Wanneroo (now Barbagallo Raceway) was the scene of Brock’s season-best finish in a race that had to be restarted after a mid-race deluge. Smart tyre choices in the varying conditions and the M3’s suitability to the twisty layout helped Brock to take fourth place.

Sixth in the last-ever ATCC round held at Adelaide International Raceway followed, and then a solid fifth place at Lakeside where Brock gave a spirited chase to the Holden Commodore of his old team-mate, Larry Perkins. Brock’s home race at Sandown was spoilt by an oil line problem and the smoky M3 struggled home in 13th, before another fifth in the penultimate round at Amaroo Park where Brock and Richards were joined by Channel Seven TV commentator and team endurance driver Neil Crompton in a third M3. Brock’s final ATCC round for BMW at Oran Park was another trying affair, and after struggling to 11th in qualifying he came home eighth after Glenn Seton’s Nissan Skyline pipped him for seventh at the finish.

Brock ended the ’88 ATCC sixth overall and went without a podium finish across the season for the first time since he had begun competing full-time in the championship in 1973. While the giant-killing M3 took Richards to the title in 1987, the reality was that Brock switched to the German marque a year too late. By 1988, the naturally aspirated M3 did not have the firepower to match the Ford Sierras, with Dick Johnson Racing mastering the complex, turbocharged weapon in its second season to claim every round of the season bar one.

Brock’s BMW experiment was brief and he joined the Sierra ranks himself in 1989 before returning to Holden in 1991. The M3 was the first non-Holden product Brock ever raced in the Australian Touring Car Championship, and while it was far from the legend’s most successful touring car, it was certainly one of his most unique.

This unique model will form part of the Biante Peter Brock Collection and has been produced in die-cast with fully opening parts, detailed racing interiors and high quality finishing. 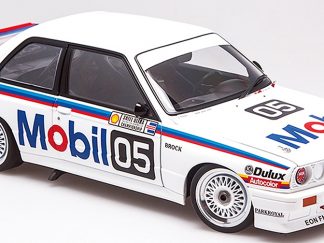