Produced in die-cast with opening parts and high detail.
The 1980 Formula 1 World Champion, Alan Jones was right at the forefront of the return of V8-powered Falcons and Commodores to the top level of Australian touring car racing in the early 1990s. After stints alongside Colin Bond in Alfas and Ford Sierras and then a spell alongside Tony Longhurst in Frank Gardner’s Sierras and later BMW M3s, Jones joined Glenn Seton’s team in the lead up to the endurance races of 1992.

The new winged, V8 powered 1993 specification cars were permitted to run at Sandown and Bathurst that year, where Jones joined Seton as co-driver. Their early experience of solving teething problems with the new EB model Falcon V8 gave them a head start on much of their opposition and, come 1993, Jones was a full-time driver alongside Seton in the second PJ #35 Ford. It would turn out to be a brilliant year for the team, finishing 1-2 in the Australian Touring Car Championship with Seton leading home Jones in the final point score.

Jones started the year slowly in the opening round at Amaroo Park in Sydney where he carded an eighth and a sixth in the two races. But things stepped up a notch at Symmons Plains in Tasmania as Jones clean-swept the round to win both races. The win was Jones’ first-ever Australian Touring Car Championship round victory.

It wasn’t without controversy though as he attracted the ire of reigning champion Mark Skaife. Jones snow-ploughed the #1 Commodore off the road exiting the hairpin and later in the same lap helped dispatch Wayne Gardner’s Holden Racing Team entry off into the scenery! There was certainly no doubt that the veteran of the rough-and-tumble world of European racing was not afraid of getting stuck into the cut and thrust of racing!

A third place at Phillip Island was followed by another round victory at his home round at Lakeside in Queensland, where Jones finished second to hometown hero Dick Johnson in Race 1 but was able to turn the tables in Race 2 and clinch his second round win of the season. The next round at Winton wasn’t as solid as Jones was wiped out of Race 1 trying to avoid an accident between Skaife and John Bowe. In trying to avoid the mayhem in front, Jones collided with the HRT Commodore of Tomas Mezera and that put both of them out of the race. Jones fought back in Race 2 from the back of the grid to pass 20 cars and eventually salvaged fifth place. He returned to the podium with a third overall at Eastern Creek but by now it was clear that the championship was very much Seton’s to lose.

Jones was fifth overall at Mallala but failed to finish Race 1 after his Ford’s engine overheated. That meant another charge through the field (given the Race 2 grid was determined by the previous race’s finishing order) and this time he moved from 21st to fifth. Terrible wet conditions at Barbagallo in Perth left Jones as the top Falcon finisher in eighth overall but that was nothing compared to the drama that befell the team in the lead-up to the final round of the ATCC at Oran Park.

A test session at Phillip Island saw Jones’ #35 Falcon written-off in a crash with former Toyota works driver Drew Price at the wheel. That forced the team to move Jones into Seton’s title-winning chassis and the new champ debut a new car at Oran Park. The priority was for Jones to stay in front of John Bowe to ensure a 1-2 championship finish and that’s exactly what unfolded as Jones’ sixth place for the weekend was enough for him to seal the runner-up position in the title. He finished with 148 points to Seton’s 191 and eight clear of third-placed Bowe. All up in the 1993 ATCC, Jones collected two round wins, three race wins, one pole position and four podium finishes from the nine rounds. It would remain his best championship-finishing position of his ATCC career. 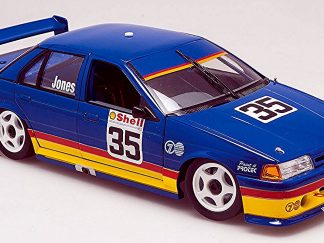