VICTORY in the annual Sandown endurance classic eluded Dick Johnson for many years, since the mid-1970s in fact, however he and long-time teammate John Bowe finally conquered the 500-kilometre race in 1994 aboard their #17 Shell-FAI Racing Ford Falcon EB.
The victory was also special given it was the beginning of a unique endurance double as Johnson and Bowe also went on that year to win the Tooheys 1000 at Bathurst, becoming the first combination in 10 years (since Peter Brock and Larry Perkins in 1984) to win the Sandown 500/Bathurst 1000 double.
But the duo’s path to victory in the Sandown classic in 1994 (also the 30th anniversary event given the first Sandown touring car endurance races was in 1964) was one that began for them well outside the top 10 – from way back in 15th on the grid in fact.
A rain-affected Saturday qualifying jumbled the order of the grid given drivers that got onto the circuit early and set a time (before further showers arrived) were best-placed and those that headed out later had a wetter circuit to contend with.
So that left Bowe 15th on the grid in the field of 29 starters in a field consisting not only of five-litre V8 touring cars but also production cars that were used during the early 1990s at the event to bolster the thinner touring car fields.
But that proved no obstacle to the Tasmanian star, who sliced his way through the field to assume the lead by lap 30. A long brake pad change in the first pit stop cost the #17 Falcon time when Johnson climbed aboard the car, however a Safety Car period soon after allowed him to regain the lost ground easily and Bowe jumped back in to finish off the race and take a strong victory.
“This was the best touring car I have ever driven,” he exclaimed post-race of the car, which had been the chassis driven by Johnson throughout that year’s Australian Touring Car Championship.
“Other than a slightly soft brake pedal it was as good at the end as it was at the beginning.”
While victory that day was important for Johnson, it also came through gritted teeth. He only drove the mid section of the race due to a painful tailbone injury that limited his time in the car to 55 of the 161 laps
“It just happens when you lose a bit of weight,” he said post-race after losing weight due to a controlled diet and exercise regime in the lead up to Bathurst.
“I had to cut a hole in the seat so it didn’t kill me.”
Most certainly it did not and he and Bowe led home the Winfield Commodore of Mark Skaife/Jim Richards and similar Castrol car of Larry Perkins and the late Gregg Hansford to seal a popular victory.
As it turned out, Johnson and Bowe won the race from 15th on the grid – the lowest grid position ever seen for a Sandown 500 winner that remains a record that still stands today.
The Ford duo returned a year later to win their second ‘500 in a row with Bowe going on to score a third Sandown 500 win in a Ferrari when the race was run for Nations Cup and GTP cars in 2001 under the PROCAR banner.
However, victory in the 1994 Sandown 500 proved to be a big breakthrough for Johnson and Bowe and started the wheels rolling for the duo to claim victory at Bathurst and Bowe to win the following year’s Australian Touring Car Championship.

Forming part of the Biante Dick Johnson Collection and coming with a signed Certificate of Authenticity by both Johnson and Bowe. 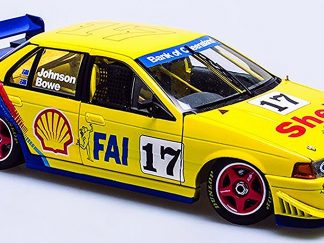