With the banning of cigarette advertising coming into the sport at the end of 1995, Phillip Morris had to get creative to stay in the sport and approached Alan Jones to run a two-car team under the banner of Pack Leader Racing. Alan brought in Ross and Jim Stone to operate the team and the beautiful blue and yellow Fords hit the track for the 1996 season with Alan driving car #301 and Paul Romano driving the sister #201 car. For the Bathurst 1000 the services of Allan Grice were employed to co-drive with Jones but the race was cut short for car #301 on lap 25 with a massive engine fire forcing him to stop the car on the climb up to the cutting. The scenes of the marshals scrambling to put out the fire before the car was destroyed have become some of the most memorable TV footage from Bathurst in the 1990s.
Code: AD81003 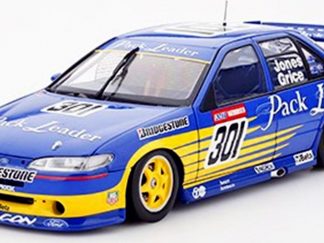