The 2016 Sandown 500 was dubbed the ‘Retro Round’ by the Supercars body which saw many teams up and down pitlane embrace the history of the sport or their teams by running retro styled liveries or uniforms. As a team with decades of history in Australian motorsport and now with ties to an illustrious history internationally, DJR Team Penske embraced the retro round by unveiling one-off liveries for the event.

Run during the season as car #12, Fabian Coulthard and Luke Youlden’s entry number was changed to car 66 for the event with the livery drawing inspiration from a famous Team Penske win. In 1972, Roger Penske took Mark Donohue to the Indianapolis 500 in the No 66 Sunoco Special McLaren. After a race where Donohue only led the final 13 laps, he crossed the line to deliver Team Penske its first win at the famed Indianapolis Motor Speedway in only the team’s fourth attempt. Donohue’s average speed of 162.962 mph set a new race record that would last until 1984. The blue and yellow #66 livery would become one of the most famous liveries raced by Team Penske and the significance of the design now being replicated on an FGX was highlighted by DJR Team Penske Managing Director Ryan Story;

“The MightyMite Special is the first time we have used a Team Penske inspired livery here in Australia. It marks a very special point in the history of the team as it was Roger’s first Indy 500 win with a truly legendary driver in Mark Donohue, who to this day remains the team’s winningest driver across multiple disciplines. Donahue was a ‘renaissance man’ and it’s a great privilege and honour to celebrate his ’72 victory and Team Penske’s 50th anniversary with this livery.” 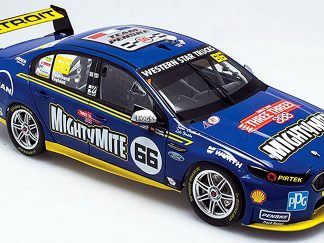