The 2016 Sandown 500 was dubbed the ‘Retro Round’ by the Supercars body which saw many teams up and down pitlane embrace the history of the sport or their teams by running retro styled liveries or uniforms. As a team with decades of history in Australian motorsport and now with ties to an illustrious history internationally, DJR Team Penske embraced the retro round by unveiling one-off liveries for the event.

The livery for the team’s #17 FGX Falcon was influenced by the 2003 Shell Helix design which was run by Steven Johnson and Max Wilson. When the modern take on the impressive livery was unveiled to the public, Dick Johnson explained the significance of the design;

“In recent years we have rolled out a number of retro liveries at Bathurst. But there is no doubt that the Shell designs are the ones that really relate to the fans. This one was special as Steve and I worked closely with the designers to come up with something quite different. We had run the red Shell Sierras and mostly yellow Falcons previously, so the 2003 Shell Helix design was something we wanted to really stand out. It will be great to see it out on track again.” 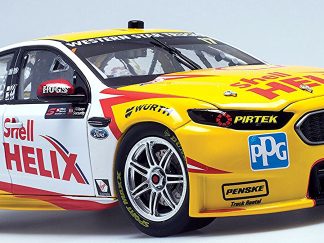