Ian ‘Pete’ Geoghegan’s victory in the 1968 Australian Touring Car Championship marked the end of an era given it was the last time in history that the title of Australian Touring Car Champion was decided by a single race, rather than a series of races. The victory also gave Geoghegan his third consecutive ATCC crown, having won the 1966 title at Bathurst and the 1967 championship at Lakeside, his first in the Ford Mustang that ultimately took him to three title wins in a row covering ’67, ’68 and 1969.

Geoghegan would go on to win the 1969 championship – again at the wheel of the same Mustang that he’d taken to victory in 1967 and 1968 – and became the first five-time Australian Touring Car Champion in history in doing so.
He was inducted into the Supercars Hall of Fame in 1999 and passed away in November 2003. 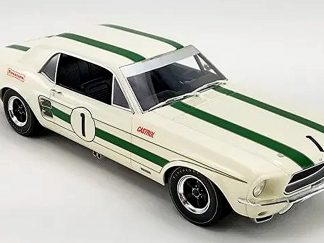