A Shelby sales rep, approached Shelby American public relations head, Max Muhleman, about building a special drag car as a PR stunt. He asked that Shelby American supply the car, Goodyear would provide the tires, local Ford dealers would be offered the opportunity to sponsor the car, and the car was to be campaigned at seven major NHRA races in California. Shelby would build 13 drag GT 350’s built in total, nine were 1965 models, four were built in 1966. This Mel Burns Ford Shelby GT350 was the second drag GT350 produced. 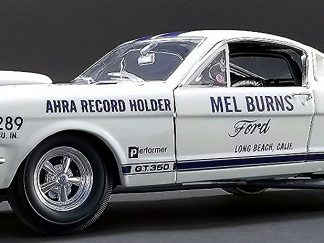