Driven by Allan Moffat, Andy Rouse and Thierry Tassin in the 1987 James Hardie 1000.

Allan Moffat and Ford are synonymous with the history of Australia’s Great Race at Mount Panorama. With four victories in the classic race in 1970, 1971, 1973 and 1977, Moffat built his career on his deeds at the public road course, but there was a time during the 1980s where he drove Mazdas and – shock! – even a Peter Brock Mobil Holden Dealer Team Commodore at the Mountain.

After last competing in a Ford at Bathurst in 1980, Moffat returned to the Blue Oval’s product for the 1987 James Hardie 1000, which also counted as a round of that year’s controversial inaugural World Touring Car Championship. After competing in an HDT-built VL Commodore in the early rounds of the WTCC (including a surprise win in the opening round at Monza in Italy), Moffat felt that if he was to be successful at the Mountain he needed to be aboard one of Ford’s new turbocharged Sierra RS500 rocket ships. A deal was done with noted British Sierra expert Andy Rouse and Moffat leased his car for the race, with Belgian Thierry Tassin part of the deal as third driver.

Repainted in white and blue ANZ colours, the #9 Sierra was crewed by a combination of Rouse team members and Moffat’s crew, including long-time loyal crew chief Mick Webb.

Things started very nicely on Wednesday practice with Rouse nailing the fastest time, but it didn’t come without incident given he hit a stray dog that was on the circuit halfway up Mountain Straight. Only at Bathurst!

The pace of the #9 Sierra was again strong on Thursday as Rouse backed up his Wednesday form with a 2m18.12s lap which was faster than both Texaco Eggenberger cars. On Friday afternoon the Brit was bested only by the #7 Klaus Ludwig/Klaus Niedzwiedz car, setting up an exciting Hardies Heroes Top 10 Shootout on Saturday morning. Rouse, the fastest of the drivers in the #9 ANZ Ford in the lead-up to the race, took the controls for the single ‘hot lap’ dash. He lapped in 2m18.468s to book a spot on the front row alongside the pole-winning Ludwig in the #7 Texaco car.

The concerns with the Sierra runners on race day revolved around whether the fast turbo cars would be able to last the 161-lap distance. There was no doubt about their pace, but reliability, in particular the Rouse-built car, was questionable. The Dunlop-shod #9 Sierra made the best of the starts as Niedzwiedz crept away slowly from pole in a bid to save the driveline of his #7 Sierra. Rouse led Steve Soper, Andrew Miedecke and Allan Grice come the end of the opening lap, running up front for the opening two laps before Soper slipped by to take the lead at Murray’s Corner on lap three. Rouse settled into second before losing that spot to Miedecke’s locally-built OXO Sierra on lap 19 and then slipping out of third on lap 26 as Niedzwiedz started his charge back through the field.

But the ANZ Sierra would not make its first scheduled pit stop as Rouse, running fourth, rolled to a crawl on Pit Straight at the start of lap 32. He parked it in the escape road at Hell Corner with gearbox problems and a ‘box full of neutrals’ and, just like that, Moffat’s return to the Mountain in a Ford was over without the four-time winner even taking the controls on race day. Post-race inspection revealed the teeth had been stripped off second gear. Moffat would return to the Mountain in a Sierra again in 1988 sourced from Eggenberger and stepped up to two cars a year later. His team would continue to make the annual trip to the Mountain to run the turbocharged cars from 1988 to 1992 before Group A was phased out in Australian touring car racing.

Part of the Allan Moffat Collection, comes with a signed Certificate of Authenticity. 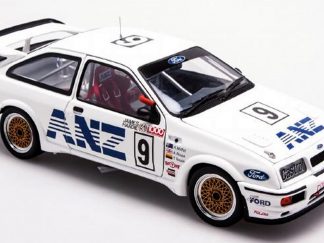