There is perhaps no more celebrated muscle car in the history of Australian motorsport than the mighty Ford Falcon GTHO. And the name linked to those mighty V8 muscle cars more often than not is four-time Bathurst winner and six-time Sandown enduro victor Allan Moffat. The Canadian-born racer moved to Australia and made a name for himself with a Coke-sponsored Mustang but in 1969 he would be part of three crews entrusted with giving the Falcon XWGTHO its racing debut in the Datsun 3 Hour Series Production car endurance race at Sandown in Melbourne.
Ford Australia had taken the motoring industry by surprise in August 1969 when it announced an even hotter version of the Falcon GT – dubbed the GTHO. The letters ‘HO’ added to the end of the model name stood for ‘Handling Options’, but there was no doubt that this was built with Bathurst in mind and the annual 500-mile race. The HO featured plenty of modifications over the existing GT, including a bigger Holley four-barrel carburetor, hydraulic lifters, a revised camshaft, new front blade spoiler,
heavier tailshaft, an alloy inlet manifold and a heavy-duty alternator. Ford still claimed an output of 290 horsepower from the 351 cubic inch V8, which may have been stretching the truth just slightly! But perhaps what stood out for salivating Ford fans was the branding of the new cars, which featured a ‘Super Roo’ logo as centerpiece to build the image of hot cars marketed via motorsport.
Ford entered three works cars for the Datsun 3 Hour at Sandown,a race that had been re-born the previous year and become the effective shakedown for what was then known as the Hardie-Ferodo 500 at Mount Panorama. Brothers Ian and Leo Geoghegan shared the #60 entry, Moffat paired with John French in the #61 car and Fred Gibson and Barry Seton shared the #62 version. French already had a deal with Alfa Romeo for Bathurst, so he was only able to drive for Ford in the Sandown enduro at not at the Mountain. On the Holden side, former Ford team boss Harry Firth had entered a new 350 GTS Monaro at Sandown with open wheel stars Spencer Martin and Kevin Bartlett at the helm. Brake problems would sideline it from the race when it fired off the back straight backwards on fire! However, Moffat took pole in the #61 Falcon for the debut of Ford’s new weapon, clocking 1m26.3s to outpoint the Martin/Bartlett’s Monaro and their 1m27.4s lap time.
A strong crowd gathered for the V8 grudge match and it was Moffat who led away from the rolling start and would not be caught in the 118 laps that were run in the threehour time length set for the race. He made a single pit stop just after the two-hour mark for French to take over and the Queenslander piloted the car to the line a lap in front of the privateer Falcon entry of Tom Roddy and Murray Carter. The Gibson/Seton works car finished third, two laps down, while the Geoghegan brothers only lasted 12 laps before Ian clipped the bridge at the Causeway and slammed off the track, up the bank and into the fence. A total of 43 cars started the Sandown enduro but they simply couldn’t cope with the pace of Ford’s new beast.
They would head to Bathurst for the Hardie-Ferodo 500 only to be cut down with problems with their Goodyear tyres, a problem Moffat did not have due to his smooth driving style. His first Bathurst win may have gone begging when the team brought him in to check the condition of his rubber, but Moffat would go on to claim further Sandown and Bathurst endurance success with the ‘HO’ in its Phase Two and Three re-incarnations. Victory in the 1969 Datsun 3 Hour though was the first of six wins in
the Sandown enduro for Moffat and the best debut possible for Ford’s debuting rocket ship.
This model will be produced in die-cast with fully opening parts, highly detailed engine bay, interior and undercarriage along with beautiful finishing throughout.
Coming in a limited edition with a numbered Certificate of Authenticity. 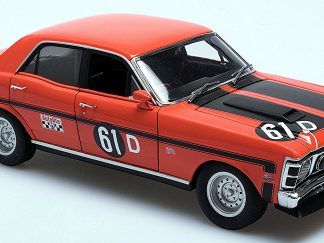