When Australian racing fans think of Hall of Famer Norm Beechey, they often conjure up images of his Neptune Holden EH S4, his 1965 Australian Touring Car Championship-winning Mustang, his Chevrolet Nova and the Shell GTS 350 Monaro that took him to the 1970 Australian Touring Car Championship. But often over-looked is the factory-supplied Shell Racing Ford Falcon XY GTHO that ‘Stormin’ Norman’ briefly ran in Series Production touring car racing in the 1972 season.

At the time, Aussie touring car racing was essentially split into two classes, the Series Production ‘standard’ cars that raced in the Bathurst 500 and the Improved Production cars that contested the ATCC. Beechey had claimed the ATCC in his mighty yellow Monaro in 1970 and again drove it the following season, though by 1972 it was having a hard time competing with the likes of Allan Moffat’s Mustang and Bob Jane’s Camaro.

Beechey had raced Pacers and Chargers in Series Production for Chrysler in 1970 and 1971 and Ford factory team boss Howard Marsden wanted him in a Falcon, so he arranged the use of an XY GTHO from the team’s fleet. The car (actually John French’s 1971 Ford Motor Company Bathurst machine) made its debut in Beechey’s hands at Winton on March 12, 1972 in the Cohn’s Series Production event. It would be here where he and Peter Brock, the man who effectively was anointed by the fans as successor to Norm as ‘people’s champion’ in the years to follow, would engage in one of their very rare on-track duels given Beechey would retire from the sport at the end of the season.

Pitted against the emerging Brock’s Dustings, Holden Dealer Team-entered Torana XU-1, Beechey started alongside the young gun for the 30-lap feature and followed the nimble six-cylinder racer into the first corner on the tight, two-kilometre layout. He ran second to Brock until just past halfway on lap 18, when the tyres on the Ford gave up the fight and a blown rear tyre forced Beechey to limp back to the pits to retire. Brock went on to win, more than half a minute clear of Frank Porter’s XU-1 and Jim Murcott’s Escort Twin Cam. Earlier in the day, Beechey had blasted away to win a five-lap scratch race by just half-a-second over Brock, who had pestered the bigger Falcon for the entire journey.

Beechey’s second appearance in the Shell Falcon GTHO came at Easter at the Hume Weir meeting with the Series Production cars supporting the second round of the Australian Formula 2 Championship. It was a busy weekend for Norm, who was competing in his Monaro at Bathurst on the same weekend in the ATCC round at Mount Panorama, making his appearance at another circuit on the same holiday weekend something of an effort!

He qualified the 350 GTS at Bathurst on Easter Sunday and headed south to arrive at Hume Weir in time to drive in the afternoon’s 20-lap feature. Earlier in the day and with Beechey still at Bathurst and thus unable to complete in the handicap race for the Series Production cars, Bruce Hindhaugh slipped behind the wheel of the yellow GT-HO for the six-lap preliminary race. He finished fourth with Brock victorious, though Beechey was back in time for the feature race and he started third alongside Brock and O’Brien on the front row of the grid. Brock took the lead after a hectic start with Beechey settling in third behind fellow Ford driver O’Brien. But again Beechey’s Shell Falcon would not finish the feature race, this time pitting to retire with clutch problems just two laps from the finish, a spare provided by O’Brien prior to the meeting not able to carry him the full distance.

And that was that. The Beechey Shell Falcon was sold off and Norm retired from racing without any pomp or ceremony later that year. He only raced the yellow XY GTHO for two meetings, but it remains a car that forms part of the intriguing Norm Beechey racing story. 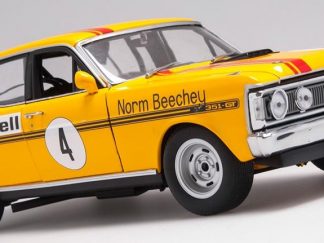