In 1971 Ford Australia released a Falcon which would not only become the most iconic car produced by the blue brand in Australia, but perhaps the most iconic car in Australian motoring history. The Ford Falcon GTHO Phase III was, and arguably still is, the ultimate Australian muscle car. With a unique high output 351 cubic inch V8 that propelled the XY to a quarter mile time of under 14.5 seconds, this car was definitely ahead of its time and could push significantly more expensive European sports cars to their limit. Combining this with a striking palette of colours, GT stripes, decals and the instantly recognisable aggressive air intake protruding through the bonnet, the Ford XY Falcon GTHO was, and still is an extremely special car to own.

While it is a certain fact that with only 300 genuine XY GTHO Phase III’s being produced, any original Phase III is a very rare and highly sought after car for Australian muscle car enthusiasts, this particular Phase III could in fact be one of the rarest. In 1971 a special heavily optioned Phase III was produced for the Rothmans Cigarette Company which, from all accounts, was supposed to be used as a promotional giveaway. The car at the centre of the giveaway was changed however when the blue Phase III was delivered and was deemed to nice to give away!

Painted in the unique Royal Umber, this was reportedly a one of a kind Phase III. Coming with the saddle interior, this ‘brown on brown’ made it an extremely rare and historically significant car. Ensure you place your orders as soon as possible to avoid missing out on this fantastic replica of one of the rarest cars in Australia. 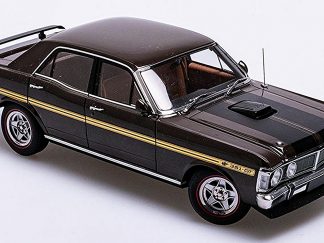