Released in October 2005, the FPV BF Mk.I GT Series consisted of the GT and GT-P variations. Both variants were powered by 5.4-litre Boss 290 V8 petrol engines with either six-speed manual or automatic transmissions. Compared to the previously released FPV BA GT, there were a number of notable differences on the new versions. The BF GT Series could be identified by their revised front bumpers, fog lights, ‘jewel-effect’ tail lights and twin exhaust outlets.

Mechanically there were slight differences between the two but the exterior of both the GT and the GT-P were a sight to behold. Both versions sat on 19-inch five-spoke alloy wheels (although there was a slight variation in the design of the two) and featured eye-catching ‘BOSS 290’ graphics on the bonnet and GT / GT-P side stripes which added a real presence to the look of the car. The sticker kits worked very well in tandem with the array of bold colour options, they we’re unmistakably a modern Australian muscle car with clear influences from famous Ford GT’s of the past. 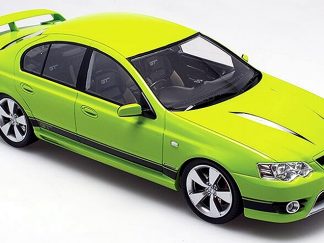