Glenn Seton is a Supercars Hall of Famer and one of the true stars in the history books of Australian touring car racing.

A hero for Ford fans, Seton won the Australian Touring Car Championship in 1993 and again in 1997.

This year we’re following that up with a limited edition collector’s print of Seton’s 1997 championship-winning Falcon EL. 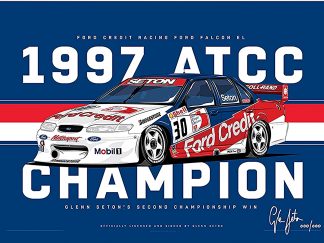