The HR Holden replaced the previously released HD when sales started to dwindle in 1966. The HR featured what appeared to be mild body changes compared to its predecessor, but in actual fact they were reasonably significant. The roof line was reworked and nearly all of the exterior panels had adjustments made to them to give the new HR a sleeker and (then) modern profile. In addition to this the front featured a new grille and squared off headlights with ‘tower type’ lights at the back.
The performance of the HR initially was bolstered due to an enlarged version of the ‘red engine’ with higher compression ratios, a new version of the twin carburettor X2 engine pumped out 109 kW (145 bhp). Soon after its release, the 186S engine became available as an option and while it still featured similar output credentials as the X2 engine, the new option delivered its power smoothly in comparison to the X2 version and it also featured Holden’s first automatic choke. The HR can also be credited as one of the cars that introduced new ‘safety’ packages to the Australian car market. Six months after its initial launch, a safety upgrade was included which saw seat belts added to the front, windscreen washers, reversing lights and sun visors.
The HR is a significant, classic Australian road car and as such, we have worked very hard to create a model that is worthy of this popular car. With separate hand brake lines on the undercarriage and extra engine bay wiring including the hood release cable and brake lines – the detailed mechanical features of this model are really quite impressive. That combined with the high attention to detail, fully opening parts and of course, the gorgeous colour combination of Tennyson Turquiose with white roof and Bone interior makes this an incredible model and one that will compliment our previous HR releases nicely in collections. Overall this is a remarkable replica of a classic Australian car. 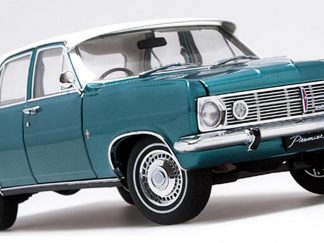