The HT Monaro was released in 1969 as part of the first generation of Monaros, replacing the first released HK version. There were various changes to the upgrade, most notably the GTS327 became the GTS350 with a change in engines. Other than the GTS350 name, the HT could easily be identified by the two equally thick GTS racing stripes that ran down the centre of the bonnet and boot for the new edition as opposed to the two thin and thick stripes running down the drivers side on the HK. Another point of difference for the HT were the two small scoops added to the bonnet that were really more stylistic additions rather than performance based.

The HT was, and still remains a popular muscle car of choice for Australian motoring enthusiasts which was certainly helped by its on track success at the Hardie-Ferodo 500 in 1969. The Holden Dealer Team entered three Monaros in The Great Race for that year, clinching a win with Colin Bond and Tony Roberts behind the wheel, with Des West and a young Peter Brock coming third and Peter Macrow with Henk Woelders bringing the third car home in sixth place.

Limited edition of 900 pieces featuring a numbered Certificate of Authenticity. 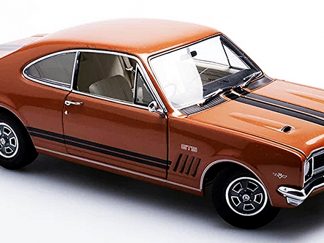