The Holden Torana is one of those iconic, Australian muscle cars born of an era where the Win On Sunday, Sell On Monday mantra from local car manufacturers was prevalent in a golden era of both motoring and motorsport for the country. The LC was the second generation Torana model introduced for the Australian market and the high performance GTR XU-1 edition was developed with the major purpose of competing against the all conquering Ford GTHO Falcons at Bathurst.

While it quickly became a favourite for racing enthusiasts due to its impressive power to weight ratio, the road cars also became very popular given their sleek, sporty looks and bold colour options available at the time. The Yellow Dolly edition is a great example of this appeal.

Produced in die-cast with fully opening parts, highly detailed engine bay, interior and undercarriage along with beautiful finishing throughout.

Limited edition with a numbered Certificate of Authenticity. 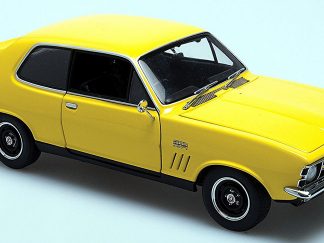