REDUCED PRICE DUE too slight yellowing of box.

1974 saw the first race at the mountain by one of the most succesful and popular drivers ever to race in Australia and New Zealand. ‘Gentleman Jim’ went on to win races and championships in almost every form of racing he has entered including Touring cars, Nascar, Sports Sedan, and Tarmac Rally.

In 1974 Jim teamed up with fellow Kiwi Rod Coppins to tackle the mountain for the first time in a Southern Comfort sponsored Holden LH L34 Torana.

Richards first made his mark in Australia at the 1974 Hardie-Ferodo 1000 with a masterful display of wet weather driving during the race, recording faster lap times than any of his opposition in the latter part of the event, eventually standing on the podium in third place. 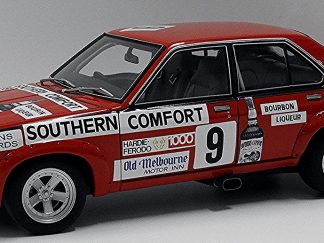