In a career that yielded three Formula 1 World Drivers Championships and 14 Grand Prix victories, including in a car he constructed himself, there was little left for Jack Brabham to achieve in motorsport, yet the lure of Mount Panorama was enough to draw the legend to The Great Race at Bathurst on three occasions in the 1970s.

Brabham made his first start in the Hardie-Ferodo 1000 in 1976, partnering former Grand Prix adversary Stirling Moss in a Torana L34 which infamously stalled and was hit from behind by John Dellaca’s Triumph Dolomite on the grid, before being repaired and rejoining the race only to retire due to an engine failure. A year later, Brabham (who was not knighted at that stage) drove with son Geoff in the second of John Goss’ Citizen Falcons, but the progress of the father-son team was curtailed by mechanical problems and they finished an unrepresentative 18th outright.

In 1978, Brabham returned for his most serious assault on the Mountain with a 4-door Torana A9X backed by McEwans hardware stores and Japanese tractor manufacturer, Kubota. Brabham ran the entry himself and also contested two rounds of that year’s Australian Touring Car Championship at Oran Park and Sandown (where he won a ‘preliminary’ touring car race, much to the delight of the crowd) as well as the traditional lead-up for Bathurst, the Hang Ten 400, also at Sandown.

Jack was to have teamed up with Geoff again, however a commitment to drive in a support race to the United States Grand Prix at Watkins Glen precluded the younger Brabham from making the trip, and Australian international Brian Muir was secured as a very worthy replacement. Nicknamed ‘Yogi’, Muir raced Holden touring cars in Australia in the early 1960s before heading to Europe where he worked as a mechanic for Brabham in Formula 1. Muir was a world-class touring and sports car driver who previously finished third in the British Saloon Car Championship and second in the European Touring Car Championship where he drove for the BMW Alpina team. He also raced Ford GT40s in the 24 Hours of Le Mans and drove alongside such legendary names as Graham Hill, Jacky Ickx, Jackie Oliver and Peter Brock, who Muir partnered in a BMW 3.5 CSL in 1976. Muir was making just his second start in The Great Race in ‘78, having last competed a decade earlier in a Monaro GTS 327 with George Reynolds and finished fifth.

Pre-race preparation of the #8 Torana went according to plan, and good management of Friday’s qualifying session, which was hit by rain after the first 10 minutes and made quicker lap times impossible, saw Brabham set the ninth fastest time and secure entry into the inaugural Hardie’s Heroes Top 10 ‘Shootout’, which took place later on Friday afternoon in improving conditions. After two timed runs (as opposed to the modern day, single-lap shootout), Brabham’s effort of 2m25.988s was good enough for eighth on the grid, while Peter Brock scorched to pole in a 2m20.006s.

The Torana ran competitively on race day but fell victim to the fast race pace and developed an overheating problem. Brabham and Muir had to make frequent trips to the pits during the race to fill the car with water, but despite their issues battled on to finish sixth, 10 laps down on Brock and co-driver Jim Richards, who smashed the race record by over 13 minutes. Based on the car’s pace, a podium was certainly possible. Indeed, the eventual third-placed Falcon of Murray Carter and Graeme Lawrence started 23 spots behind Brabham/Muir after being caught out by the conditions in qualifying.

Ultimately, it would be the last start for both Brabham and Muir in The Great Race and easily the best of ‘Black Jack’s’ three Bathurst 1000 appearances. The then 52-year old had been retired from motorsport for six years, but still competed in selected endurance and historic events later in his career. Sadly, Muir passed away in 1983 after collapsing on his way home from the Tourist Trophy race at Silverstone. 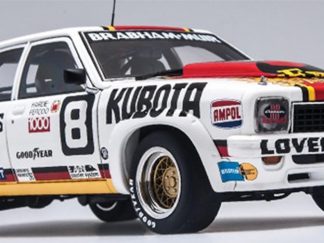