Bathurst 1991 appeared an insurmountable challenge for Holden’s brand new VN Group A Commodore as the factory Holden Racing Team aimed for its second straight victory in Australia’s ‘Great Race’. Victory at Mount Panorama is never an easy task to achieve but back then the Mountain was just that little bit taller thanks to a car they called ‘Godzilla’. The seemingly unbeatable twin-turbo, four-wheel-drive factory Nissan GT-R campaigned by Gibson Motorsport had already won Jim Richards the Australian Touring Car Championship in a canter. The privateer GIO-backed Nissan of Mark Gibbs and Rohan Onslow won the Sandown 500 too, so the chances for anyone taking to the grid in anything other than a GT-R were not good.

The defending winners of the Tooheys 1000, the Holden Racing Team continued with 1990 winning duo Win Percy and Allan Grice in the lead #16 VN Commodore with Neil Crompton and Brad Jones in car #7. The 1990 race taught the team to ‘never say never’ and Holden brought with it over 20 years of Bathurst experience and a brand-new car with the VN Group A – the last genuine Holden factory homologation race car. The #16 Percy/Grice Bathurst entry was in fact a brand new VN Commodore, the third built by the team in 1991, and had only undergone a short shakedown test at Calder in Melbourne before being packed up and transported north to Bathurst. The stage was set for a titanic battle.

As race week began the drivers of the new VN Group A learnt that the smaller rear spoiler – with less downforce – required more commitment going across the top of the Mountain. But speed wasn’t the issue for the Percy/Grice HRT car. The progress of the #16 Holden was plagued by engine problems. A consistent water leak was ultimately traced to a split bore, requiring an early engine change. But the replacement engine had a misfire. While the drivers persisted with it for Thursday and Friday the decision was taken to install the full race set-up – including the race engine – on Friday night. This meant the car would compete in the Top 10 Shootout in full race trim. With the misfire cured, Percy qualified the HRT VN ninth on the grid with a time of 2m17.732s while Mark Skaife, driving the #1 Nissan he was sharing with Jim Richards, took pole in 2m12.630s.

Percy drove the first stint but an early spin at Caltex Chase dropped the car down to 13th position. He steadily climbed through the field to hand the car to Grice on lap 32 in fifth position. Towards the end of Grice’s stint the front brakes ran hot due to the water-cooling reservoir running dry. This was planned at the end of each stint, but it happened a little earlier than expected for Grice as he’d been pushing hard to make up time on the leaders.

Coming into Murray’s Corner the front brakes overheated, causing the rears to lock and Grice to have a sideways moment across the track. HRT teammate Neil Crompton was running close behind and couldn’t avoid crashing into the back of Grice. This caused plenty of amusement among rival teams in full view of pit lane, not to mention much embarrassment in the factory Holden bunker.

The damage was only cosmetic though and the #16 VN Commodore continued its climb through the field, moving into second place when the Dick Johnson and John Bowe Sierra blew its engine on lap 123. By this stage the Richards/Skaife GT-R was coasting to victory but the second place finish for Percy and Grice was a welcome surprise for Holden fans everywhere. Godzilla had only managed to win by one lap ahead of the HRT car, an amazing result given the engine problems the Holden factory team had endured in the week leading up to the race. 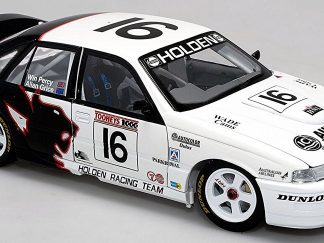