In 1980, Allan Moffat looked as though he would not be competing in the Australian Touring Car Championship as the attempted homologation of the Mazda RX7 had fallen through appearing to leave him without a drive for Sandown and Bathurst.

A deal was struck and then came the shock announcement that for the race, Moffat would be driving the No.25 Holden Dealer Team VC Commodore, the sister car to the HDT No.05 VC Commodore of Peter Brock.

The 1980 Hang Ten 400 was an endurance race for Group C Touring Cars staged at the Sandown Circuit and the event was marked by the fact it was only the second time Moffat had driven a Holden and he was in the same team as his arch rival, Peter Brock.

Brock and Moffat made it an all HDT front row on the grid. Brock won the start and Moffat remained in second place until lap 42 when after sliding wide, he hit a barrier and had to pit. After rejoining the race he pitted again to have some loose wheel nuts tightened. Allan was a lap down, but worked his way through the field to eventually finishing the race in third place.

Allan Moffat performed admirably as a guest driver in a well deserved 3rd place finish on a podium shared by only Holden VC Commodore drivers. 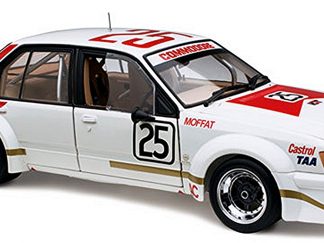