Scheduled production of only 750 pieces worldwide.

The Holden VR Commodore driven by Larry Perkins and Russell Ingall at the 1995 Bathurst 1000 was fastest in qualifying but was only able to manage 3rd position on the grid after the Top Ten Shootout.

The start of the race was significant as Perkins tried to squeeze alongside pole sitter Craig Lowndes on the run to Hell Corner. Sending Perkin to the pits with a deflated tyre. Lap 152 Perkins Stormed past Seaton cementing his 5th Bathurst win. The 1995 race will be remembered for the way that both Perkins and Ingall fought their way from last on the first lap, to take the chequered flag at the finish. Perkins and Ingall had become the first drivers in history to score a “Last to first” outright win in The Great Race. 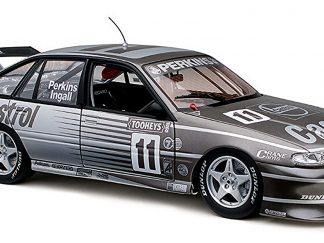