Mark Skaife and Jim Richards’ assault on the 1995 Tooheys 1000 at Bathurst was perhaps best described as ‘the one that got away’.

Skaife qualified the #1 VR Commodore second fastest in the Top 10 Shootout on Saturday morning, beaten to pole position by the man who would later be his team-mate at HRT – Craig Lowndes.

Come race morning and the team sprung something of a surprise on their rivals as Richards was behind the wheel to start the race. Many had assumed Skaife would line-up to start the 1000-kilometre event, but the expat Kiwi was more than up to the job despite a bad season on the score sheet.

Richards and Lowndes were beaten from the front row of the grid by Wayne Gardner’s Coke Commodore. Richards settled into a comfortable second place and took just six laps to work his way into the lead. From there the #1 Holden eased away from the former world motorcycle champion.

Such was the superior fuel economy of the Skaife/Richards car it would not pit for fuel until lap 38, meaning that they were within a few Safety Car laps of being able to do the race on just three pit stops – a sizeable advantage.

Skaife emerged from pit lane with nearly half a minute back to Dick Johnson and he had Perkins’ co driver Russell Ingall (desperately trying to get back on the lead lap) formed up behind him when the first Safety Car came out on lap 47.

When the race restarted, Skaife simply blazed away from the field. But on lap 64 he limped to the pits. The tailshaft had snapped, breaking the back of the gearbox and punching a hole in the floor.

They were out, history would show that Perkins and Ingall would go on to a famous victory, but Bathurst 1995 was the one that got away for Richards and Skaife. 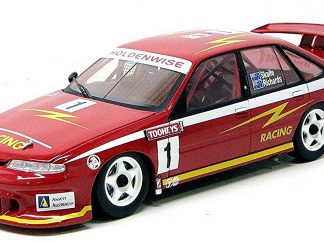