Holden has been a mainstay of the Australian Touring Car Championship since its inaugural race at Gnoo-Blas in 1960, when 17 cars, ranging from the 48-215 to the FJ and FE models, faced the starter.

The dawn of the muscle car era brought Holden’s first championship race win, Norm Beechey downing a host of high-powered imports with his Holden Monaro GTS 327. The wins kept coming as the championship transitioned into the Group C era in 1973, with a succession of Toranas and Commodores raced by heroes including Peter Brock, Colin Bond, Bob Morris and Allan Grice taking the marque to the top of the podium.

After a brief lull through the international Group A years, Holden struck back with the introduction of the five-litre V8 touring car rules in 1993 that put it head-to-head against traditional rival Ford. It was a battle that Holden’s teams and drivers fought fiercely, with legends like Brock, Larry Perkins and Jim Richards passing the torch to a new generation of stars led by Mark Skaife, Craig Lowndes, Garth Tander and Greg Murphy.

The cars they drove became synonymous with success: the VT Commodore set the pace for many seasons and through several model upgrades, before Holden’s ‘Billion Dollar Baby’, the VE Commodore, set a new record for wins surpassed only by its successor, the VF, campaigned by new stars led by Jamie Whincup and Shane van Gisbergen. Holden’s final Commodore, the ZB, secured the milestone 600th championship race win at Wanneroo Raceway in 2022 with Shane van Gisbergen’s triumph in Race 10.

This impressively designed large scale collectors print celebrates the milestone of Holden’s 600 race wins overall. It features an example of each championship race winning Holden model and the number of wins attributed to it, from the GTS 327 right through to the modern day Commodores, many of which were raced by the legendary names previously listed above.

The main car images featured through the middle of the print highlight cars raced by the top 4 winning Holden drivers, for the two top winning teams with the iconic Holden badge as the centrepiece of the design. Images of Holden’s top 10 winning drivers with their number of race wins complete the print along the bottom. It’s the ultimate collectors edition. 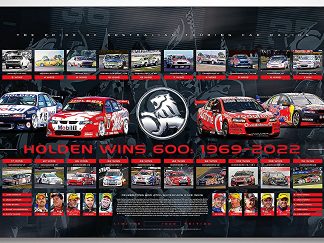