Any Australian motoring enthusiast would be familiar with the HSV nameplate. Established in 1987, the official performance arm of Holden have been producing wild, spine tingling variants of Holden road cars for almost 30 years now. Perhaps one of the most conic HSV names to have ever been produced is the Clubsport. Starting from all the way back in 1990 with the VN range.

The Gen-F HSV range was introduced by HSV in 2013 after the launch of the new Holden VF Commodore. It brought in a more subtle level of styling compared to the more visually aggressive outgoing E3 models.

Gen-F’s benefited from a vast array of improvements including feature keyless entry/starting, parking sonar (front and rear), rear camera, blind spot assist, rear cross traffic alert, auto parking and auto electronic park brake. And those were just the base driver aids and safety features! There were also many improvements to the electronic vehicle performance systems, and mechanically, there were 4 different engine specifications with the 317, 325, and 340kw combo’s featured on the Clubsport, Senator, Grange, and Maloo’s. With the GTS packing the fire breathing supercharged 430kw LSA. Also upgraded were the brake packages on all models plus new Continental tyres across the whole range.

The 1:18 Scale replica of this model is an exceptional collector’s piece. Produced in sealed body resin the first thing you notice upon inspection is its significant quality of craftsmanship. The body lines are beautifully replicated on this model given the way it has been produced with the door gaps and joins between the panels looking as realistic as possible. The model includes a number of very nice features including the badge work, metal etched grille in the front bumper assembly along with the metal etched side vent, and the new wheels are presented extremely well.

Despite being a sealed body model, no shortcuts have been taken with replicating the interior of this model. Upon looking through the clear windows you can see a very high attention to detail right down to the dashboard instrumentation and logos. Last but not least, the Perfect Blue colour scheme simply looks phenomenal and finishes the model superbly well.

Produced in a limited edition number and will come with a numbered Certificate of Authenticity. 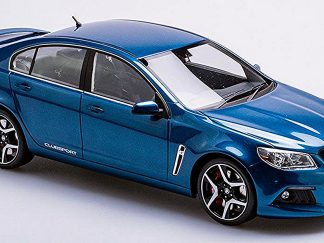