In the TV show, K.A.R.R. was a prototype vehicle created before K.I.T.T. by Wilton Knight himself. K.A.R.R. was immediately deactivated because it featured a serious problem in the system: it was programmed exclusively for self-preservation and not to protect human life (unlike K.I.T.T.). Stored away in the Knight Museum of Technology, K.A.R.R. was re-activated by mistake and becomes a very dangerous enemy for K.I.T.T.

Ian O.
I have received the products (Mad Max models) today. I liked the products very much. Thank you for the careful packing and quick transaction.
Yukiya
Japan
I just wanted to let you know that I received Order #1687 for my 3- 1:43 car order and couldn’t be more pleased with both the cars and their boxes. Thank you very much. Have a g’day down under. 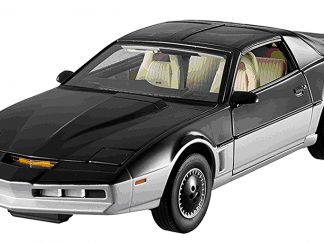