In 2013 the V8 Supercars Championship visited the United States of America to hold their first (and only) championship round in the country at the Circuit of the Americas in Texas for the Austin 400.
The Brad Jones Racing run #14 Lockwood Racing Holden VF Commodore was one of the teams to contest the historic American round with Fabian Coulthard behind the wheel and were in decent form as one of the teams who came out of the box swinging with the introduction of the new VF package for that season.
In fact, the team that often ‘punches above their weight’ were the only team at the 4-race Austin 400 round who could seemingly challenge the dominant Triple Eight Race Engineering Commodores led by Jamie Whincup and Craig Lowndes, with Coulthard finishing on the podium in all 4 races which included a pole and a race win over the weekend.
It was a strong performance from Coulthard and BJR at the USA round for Supercars, a trip that hasn’t since been repeated and probably isn’t likely to in the near future. 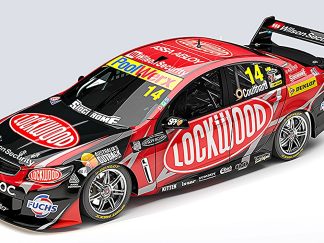