The Sandown 500 holds a special place in Australian motorsport as one of the most historic touring car events in the country having started as a six-hour race back in 1964.

In recent years the Virgin Australia Supercars Championship has turned the endurance classic into its annual ‘Retro Round’ where cars, drivers and achievements of years gone by are celebrated, in particular by ‘throwback’ liveries on the current Supercars on-track.

For the 2017 race Triple Eight Race Engineering came up with striking retro liveries on its three cars for the Melbourne classic, giving them a much different appearance to their regular look they carried in previous rounds of the championship.

“Keeping true to the look of the era, the bonnets of the Red Bull Holden Racing Team Commodores are dark blue, maintaining the stark contrast between panels that was common for the period.”

The RBHRT cars were fast at Sandown when they were rolled out onto the track. Whincup and Dumbrell qualified fourth after the Saturday qualifying races with van Gisbergen/Campbell 21st after issues. Both were contenders for the podium in the 500-kilometre classic though both fell victim to punctures that eliminated each crew from challenging for victory. Dumbrell led the race in car #88 before he had a tyre let go on lap 36, though he and Whincup were able to fight back and eventually claim sixth place and crucial points for Whincup’s championship challenge. “Overall it was a disappointing result but I’m pretty proud of everyone,” said Whincup post-race. “We tried, we pushed through hard, we had our challenges all week. We had a quick car again and led the race ‘til the tyre blew out, I’m not sure why but we will investigate on what happened there.

“We put on a good show up until the midway point but unfortunately not our day. We made our way up and scored some solid points. PD had a great drive, he led by four and a half seconds and we couldn’t have asked for anything more.” 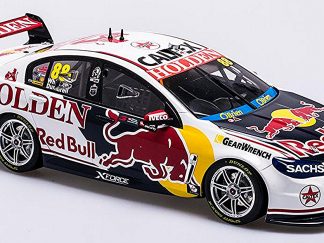