Two-time Bathurst 1000 winner Allan Grice is undoubtedly a star in the history books of Australian touring car racing and, while he drove a wide range of cars, he spent the majority of his tin-top career driving Holden products. So imagine the horror of Holden fans in 1994 when it was announced he was going to drive a Ford for Dick Johnson at Bathurst!

At that stage the National Party member for Broadwater in the Queensland state government, Grice was no longer a full-time driver but he proved to be a savvy signing for Johnson’s two-car Falcon team for the two long distance races. While Dick himself and John Bowe shared the lead #17 entry, 53-year-old Grice was slated to share the #18 car with Dick’s 20-year-old son Steven. ‘Junior’ Johnson was making his Bathurst 1000 debut after racing a rotary-powered Datsun Sports Sedan in Queensland; the signing of Grice providing an experienced hand under which the young gun could tackle Mount Panorama for the first time in a V8.

The duo’s first event together – the Sandown 500 in September ’94 – was solid, the #18 car finished eighth and two laps behind the winning sister entry of Johnson and Bowe. The Sandown 500-winning #17 car became the Grice/Johnson #18 chassis for the trip to Bathurst in October, giving Grice a race-winning Ford in his 22nd start in Australia’s ‘Great Race’.

The Shell-FAI team used a spare car (entered under the #19 racing digit) on Wednesday to allow its four drivers to get their eye in before things got serious with qualifying. Johnson Jnr was given seat time during qualifying in car #18 and impressed by setting the ninth fastest time in Friday afternoon’s session but it was Grice that really vaulted their entry further up the order to be fourth fastest and safely in Saturday’s Top 10 Shootout.

A former Bathurst pole-sitter (back in 1982, when his co-driver was just eight years of age!), Grice was given Shootout duties and, despite confessing to some small errors, punched out a 2m13.1959s lap to qualify the #18 car seventh on the grid and be placed as the top Shell-FAI car given Johnson Snr hit the wall on his hot lap and was 10th fastest.

Race day dawned wet with showers affecting both the morning warm up session and the start of the 161-lap, 1000-kilometre race. Given his experience it was Grice who was selected to start the race in the tricky, slippery conditions. He held the #18 car in the top 10 in the race’s early stages before pitting to change to Dunlop’s intermediate tyres given the drying circuit surface.

But then the rain returned and that’s when the #18 Falcon hit a major delay. Grice fell victim to the sudden downpour, slipping off the road into the sand at McPhillamy Park on the very lap he was coming back into the pits to switch back to wet weather rubber.

A separate accident involving one of the two-litre class cars soon after caused the Safety Car to make its first appearance of the day, thereby getting Grice off the hook and giving him the chance to be removed from the trap. He lost two laps to the leaders during the delay and, while he and Johnson recovered one of those laps by pushing hard for the remainder of race, they crossed the line in seventh position with 160 laps completed – Grice drove 94 and Johnson 66.

Johnson performed admirably in his debut Bathurst 1000. While he was overshadowed somewhat by runner-up rookie Craig Lowndes, ‘Junior’ barely put a wheel out of place and started to build his reputation as a reliable and strong performer in endurance racing.

That year’s #18 Shell-FAI Falcon EB proved to be the perfect launch pad for Johnson Jnr’s Bathurst 1000 career while it also proved Grice, despite no longer racing full-time, was still very much a fine competitor at the most famous circuit in the country.

Johnson eventually became a full-time driver for Dick Johnson Racing between 2000 and 2012 while Grice made his last Bathurst 1000 start in 2002. He ended his career with 26 starts in the Bathurst classic, amassing two wins, seven podium finishes and 13 top 10 results.

Produced in die cast with fully opening parts and high detail, this model will be produced in an exclusive limited edition and will come with a numbered Certificate of Authenticity. 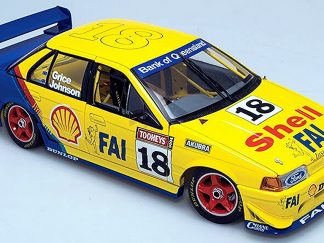