The 1996 AMP Bathurst 1000 race kicked off with a rough start before any cars were on the track. Heavy rainfall came before the race and even through the rain had cleared when the green light flashed, there was some dark clouds in the distance approaching the race track.

Peter Brock and Tomas Mezera placed 4th on the starting grid giving them a decent positioning considering the bad weather. Safety cars and crashes were a common sight during the race causing many issues. Then things started to go poorly for Brock on lap 46, he lost his poise for a split second and found himself nose first into the barrier, luckily the damage was mostly cosmetic, a quick pit stop was called at lap 49 to tape up the damage.

Lap 52 brought more bad news for the Holden VR Commodore and another pit stop was needed for a mechanical issue that took the Holden VR Commodore out of the leading lap. After coming out of the pits on lap 53 No. 05 was placed 17th and fought their way up to fifth position by the 74th lap and held 5th place for the remainder of the race, completing 160 laps and a time of 7 hours 9min 47.676s. 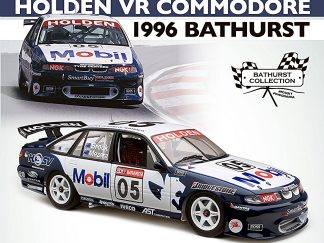