When the livery was announced in 2015 Tander said he is passionate about ANZAC Day and the RSL’s appeal because of family ties. “ANZAC Day is a very special day in my family because my grandfather served overseas in the Army, so when you say ‘ANZAC’, the first thing I think about is respect,” Tander said. “The ANZAC spirit epitomises what Australia is all about; going out of your way for a mate, doing the hard work, and doing it properly, and working together – and now as a parent I’m making sure my kids hear the full ANZAC story and what it means. To me, it’s special to be able to carry the ANZAC Rising Sun, and even more so this year with the 100th anniversary of the Gallipoli landings.”

Given the national significance of the day and the wide support for the annual initiative by Holden and HRT, the 2015 ANZAC Appeal livery has been one of the most highly requested models from collector’s for Biante to produce for quite some time. We’re very pleased that we have been able to gain approval to produce it and in staying true to the purpose of the ANZAC livery each year, part proceeds of the sale of this model will be donated to the RSL’s ANZAC Appeal.

This 1:43 Scale replica of Tander’s 2015 Holden Racing Team ANZAC Appeal Commodore will be produced in die-cast with clear windows, highly detailed racing interior and faithfully replicated livery. It will come presented in a clear acrylic display case with a stamped base plate and will be produced in an exclusive limited edition quantity with a numbered Certificate of Authenticity. 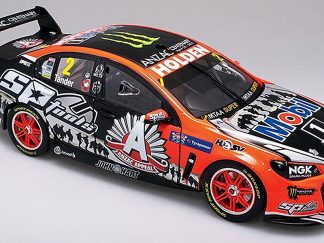