The 1997 Bathurst 1000 was a classic, particularly given the emotion surrounding Peter Brock’s retirement and the record crowd cramming onto Mount Panorama to farewell him.

The number 34 Holden VS Commodore driven by father and son duo, Jim and Steven Richards, just missed out on the Top Ten Shootout, positioning themselves in 11th place on the starting grid for the Great Race.

By lap 50 of the race, the Richards VS Commodore had progressed to 6th position, slowly making ground on the leap group and by lap 63 had put themselves in position for a podium finish in 3rd place. They made their move on lap 128 into 2nd position and would fiercely contest for the race win from here on in, ultimately completing the 161 race laps in a time of 6.22.06.6478 behind the eventual winners, another Holden VS Commodore , driven by Larry Perkins and Russell Ingall.

Amidst the mayhem and carnage throughout the race, the Castrol VS Commodore duo maintained the kind of pace which saw many others perish under the pressure in one of the most amazing races ever seen on the Mountain. 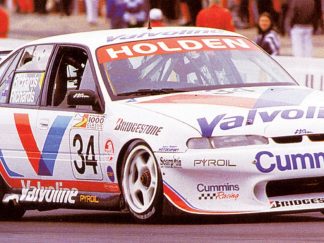