After joining the popular Garry Rogers Motorsport in 2016, James Moffat finds himself driving for a third different car manufacturer in three seasons. Nissan, Volvo and now in a Holden Commodore for 2017, Moffat has been unfortunately forced to learn a new car setup at the start of each year which is a difficult task for any driver but it certainly makes for an interesting collection of cars if you’re fan of his! Biante are pleased to again be producing models cars with James Moffat’s name on the door after supporting him early in his career as a development series driver and the Wilson Security Racing GRM VF Commodore is certainly a great looking car.

This model will be produced in die-cast with fully opening parts other than the boot featuring high detail throughout in an exclusive limited edition with a numbered Certificate of Authenticity.

Ed
US
I have received the products (Mad Max models) today. I liked the products very much. Thank you for the careful packing and quick transaction.
Yukiya
Japan
I just wanted to let you know that I received Order #1687 for my 3- 1:43 car order and couldn’t be more pleased with both the cars and their boxes. Thank you very much. Have a g’day down under. 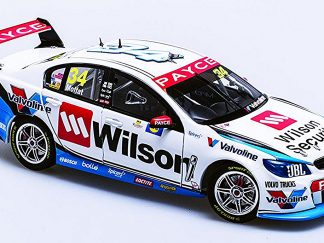