2020 Dunlop Super2 Series Championship winner Thomas Randle is slowly but surely making his way into full time main game Supercars racing.
After a successful wildcard outing in 2019 with Tickford Racing, a championship in the development category in 2020 along with a Supercars endurance drive with BJR at Bathurst, 2021 has seen the next step in the development of Randle’s promising career.
Not only has he once again competed as a wildcard entry with Tickford Racing at numerous rounds, he also scored the co-drive for the Bathurst 1000 with James Courtney and has signed on to be a full time driver with Tickford in the Supercars Championship for 2022.
Randle is a driver with championship qualities and we’re very proud to be replicating his wildcard Castrol backed Ford Mustang GT which will be based on the 2021 OTR SuperSprint at the Bend round. 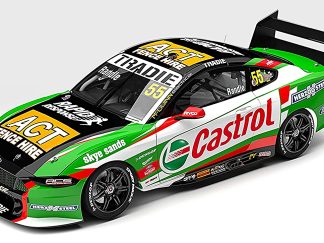