About This Product: A fan favourite team with David Reynolds in the seat and Betty at the helm, Erebus Motorsport proved that it’s not always the ‘big’ teams who win the great race in 2017.

Partnered with co-driver Luke Youlden, David Reynolds was on the pace all weekend in his Penrite backed Holden VF Commodore with a shootout lap of 2:04.2746 helping him to start on the front row next to pole sitter Scott McLaughlin.

Come Sunday morning, the nations eyes were on Mount Panorama with the #9 Commodore amongst the front-runners all day despite poor weather and a very wet track. As the common saying goes though, you have to be in it to win it and both Reynolds and Youlden put on a measured and excellent display of wet weather driving to ensure they were there to capitalise during the last laps of the race when the opportunity presented itself.

It was an action packed finish to the race. With just 16 laps to the checkered flag, Reynolds sat fourth on the final restart and capitalised on other drivers errors to launch himself into into the top spot to take out the Peter Brock Trophy and mantel of being the 2017 Supercheap Auto Bathurst 1000 winners – the first Bathurst 1000 victory for both drivers and the team along with the team’s first win since their switch to Holden in 2016.

Reynolds was obviously ecstatic with the victory and duly celebrated on the podium with a ‘shoey’ “It feels really, really good. As a team we have worked extremely hard over the last year and a half to get to this point, it’s been a massive whirlwind experience. I owe everything to Betty, Barry and Al, it’s not just Luke and I, there’s an entire team of talented people behind us. Since we rolled the car out on Thursday it has been fast. We didn’t have the best pace in the wet but as the track dried out we had heaps of grip out there and it all switched on.”

You can now celebrate this iconic victory with this limited edition illustrated print which we’re proud to have produced in association with Erebus Motorsport. 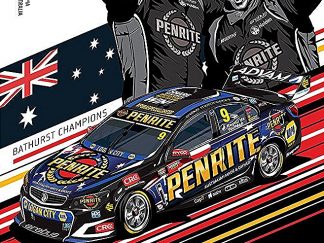