Finishing on the podium at Mount Panorama in the Supercheap Auto Bathurst 1000 is a special result any year, but for Scott Pye and Warren Luff their runner-up finish in the 2017 race was indeed extra special.
Mobil 1 HSV Racing had undergone a rebrand for the new Supercars season after being known as the Holden Racing Team for so many years, but there were familiar colours on the car for the all-important endurance events – colours that repeated history.
For the Sandown ‘retro’ round in September the team adopted a modern interpretation of the team’s 1994 Mobil HRT livery as carried by Peter Brock, Tomas Mezera, Craig Lowndes and Brad Jones – including re-numbering their car from its regular #2 to #02.
Such was the positive feedback from the team’s adoring fans, Mobil 1 HSV Racing stuck with the colours for their assault on Mount Panorama and, like in 1994 with Lowndes and Jones, brought home a popular runner-up result.
The weekend of Bathurst 2017 was big off-track for the Mobil 1 HSV Racing too, with the announcement of new partnerships with Andretti Autosport and United Autosports to form Walkinshaw Andretti Autosports for the 2018 season.
Not many people had figured the #02 Pye/Luff car in their list of favourites for the race, especially considering that they lined up 20th on the grid for the 161-lap, 1000-kilometre classic.
The team went against the grain for the race start too – instead of putting its full-time driver Pye in the car for the first stint, co-driver Luff assumed the controls of car #02 in the wet, slippery and tricky conditions.
Despite being up against a field of full-time drivers who race Supercars all year, the former V8 Utes champion was in brilliant form and sliced his way forward in the pack, forcing his way into the top 10.
On a day where plenty of top drivers made mistakes, the Mobil 1 HSV Commodore kept its nose clean and, with the track dry and the field racing hard to the finish Pye worked his way up to second place.
He managed to withstand huge pressure from Kiwis Shane van Gisbergen and Fabian Coulthard to bring home his first Bathurst podium result and the team’s second podium finish of what had otherwise been a very tough season.
“It’s so cool being on the podium at Bathurst,” said Pye in the aftermath of the race.
“I’m so happy to get this result, and so happy for the team as a whole. Everyone here deserves this; they have worked so hard this year.
“It was difficult out there, the conditions were crazy. Full credit to Luffy, he did a mega job to get us right up there, which set up our day.
“Safety cars came and went, but we felt like a couple of them didn’t work in our favour, and a couple did. That’s what Bathurst is about, you’ve got to keep looking forward and staying positive.
“That restart at the end was crazy. It took a while to get going, it was great fun, the conditions at the end made it even better.”
For Luff the result marked his best-ever finish in the Bathurst 1000 at his 17th attempt, having finished third on three separate occasions in 2012, 2013 and 2015.
“To be on a Bathurst podium with this team, in this car, is incredible,” he said.
“Everyone in the team deserves this. It’s an amazing event, and to finish the race on a high on the podium, and for it to be Scott’s first here is extra special.
“There’s been a lot going on with the team with the recent, and exciting announcements of our new partners, so a result like this couldn’t have come at a better time.
“We had a really good overall day today, everyone played their part, the car was good, and Scott did an incredible job at the end to bring it home in second.” 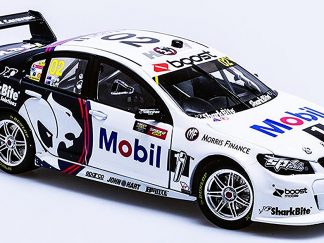