Running a rolling sponsorship model for the 2017 season, Brad Jones Racing unveiled a striking Clipsal livery that would be run on car 8 at the opening round of the season in Adelaide. The livery would coincide with the conclusion of Clipsal’s naming rights sponsorship after 2017 of the popular Adelaide race after being known as the “Clipsal 500′ since 1999.

This model will be produced in die-cast presented in our clear acrylic display case in an exclusive limited edition with a numbered Certificate of Authenticity.

There are no reviews yet. 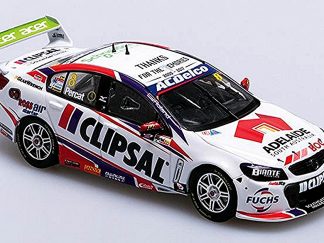