“17 for 17” – DJRTP04: The Most Championship Race Wins in DJR/DJRTP History Print

“17 for 17” – DJRTP04: The Most Championship Race Wins in DJR/DJRTP History Print

When Kiwi young gun Scott McLaughlin was recruited to drive the famous #17 Shell V-Power Ford FG X Falcon for DJR Team Penske in the Supercars Championship he had a profound and record-breaking impact.

This dominant run of results makes DJRTP04 the most successful DJR/DJRTP car in championship race history and delivered many memorable moments. These include McLaughlin’s heart stopping Bathurst 1000 pole lap in 2017, taking out the 100th championship race win for the team, winning the Jason Richards Trophy at his home race in New Zealand and of course, his maiden 2018 drivers championship victory which would fittingly retire the Falcon nameplate with a 17th championship. 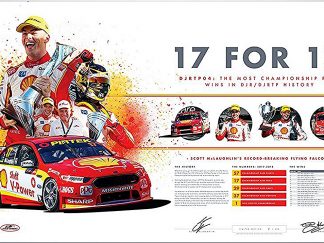