Limited edition illustrated print featuring the #17 Falcon Scott McLaughlin and Alexandre Prémat will be driving at the 2018 edition of the popular retro round along with Dick Johnson’s Championship-Winning #17 Sierra which celebrates the 30 year milestone. 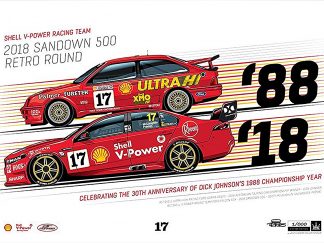