Former Supercars Champion and Bathurst 1000 Winner Mark Winterbottom recorded an incredible milestone at the 2021 OTR SuperSprint at the Bend where he racked up his 500th consecutive Supercars race start, the first driver in the history of the championship to do so.
A streak which started from the middle of the 2005 season, Winterbottom hasn’t missed a Supercars race since. During that time he has scored 36 pole positions and 38 race wins to be among the best drivers in Supercars history.
To celebrate the milestone at The Bend, a special ‘Congratulations 500 Consecutive Race Starts’ sticker was placed on the drivers side rear door window above Winterbottom’s name on his stunning IRWIN Racing Holden ZB Commodore.
Authentic Collectables are very proud become the official model car partner for Team 18 / IRWIN Racing to be able to replicate the #18 Commodore. 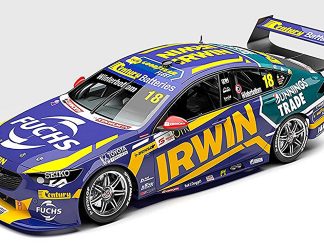