Everything was going right for the only all-rookie combination of Anton DePasquale and Will Brown at the 2018 Bathurst 1000. Their special red chrome Holden ZB Commodore looked every bit the part and they were proving to be very fast. Then race day came and everything started to come unstuck.

After an impressive showing from DePasquale in the Top 10 Shootout to set a time worthy of starting the race from third on the grid, along with an electrifying start which saw him pass Jamie Whincup to round Hell Corner in 1-2 formation behind his pole sitting team-mate David Reynolds, car 99s day then went from bad to worse.

A combination of various issues over the course of the race, including an unsecured passenger door latch early on, saw them slip through the field to ultimately finish 24th, a result that didn’t reflect how strongly the team and drivers had performed all weekend.

Despite the disappointing result on race day, no-one could argue that both DePasquale and Brown look to have bright careers ahead of them in the sport and of course, their car looked amazing. 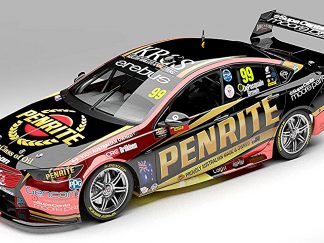