Limited edition illustrated print celebrating Scott McLaughlin’s 2019 Supercars Championship win with Shell V-Power Racing Team. Following his maiden Championship win in 2018, McLaughlin was practically an unstoppable force in 2019 aboard a brand new Ford Mustang GT. He opened the 2019 season by giving the Mustang a win on debut in Adelaide and never looked back, breaking numerous records including the most race wins in a single season and a Bathurst 1000 victory along the way.  He ultimately clinched his second championship win to become just the 10th driver in ATCC / VASC history to win back-to-back titles after a year where he took 18 wins, 15 poles and 22 podiums, along with being voted the Most Popular Driver by the fans and the Driver’s Driver by his peers.

Featuring the artwork of Australian designer / illustrator Tristan Groves, this impressive vector illustrated print shows an excited McLaughlin celebrating and raising two fingers as a nod to becoming a two-time champion along with his winning Mustang.

The print measures 594mm X 841mm printed on 250gsm matte paper using offset print technology and will be individually numbered and signed by
the artist in a limited edition of only 350 copies.
This is an amazing collector’s print for Scott McLaughlin and DJR / DJR Team Penske fans. 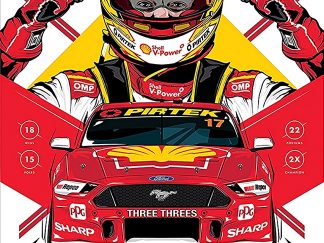