Ford Mustang GT which is based on the 1985 ATCC. This race car driven by Dick Johnson and was competitive throughout the 1985 season. Although the car did not win any races the car performed consistently and enabled Johnson to take second place in the championship.

Unfortunately the Mustangs cooling system was build for more moderate European climates, as a result Johnson wasn’t able to finish the first round in Winton due to the heat. Johnson had to make multiple stops to prevent engine damage, he ended up parking the Mustang resulting in a DNF for the first race.

Although this was a very worrying start to the Championship this was Johnsons only DNF for the whole season. Johnson racked up 9 solid finishes coming second in Symmons Plains, Calder, Lakeside and Oran Park. Placed third in Sandown, Wanneroo and Adelaide and one 4th place in Surfers Paradise.

The series ended with Johnson finishing second place with 192 points based off his best 9 races out of the 10. By the conclusion of the Australian Touring Car Championship, Johnsons Mustang was known for its consistency and the persistent threat that it posed on Jim Richards. 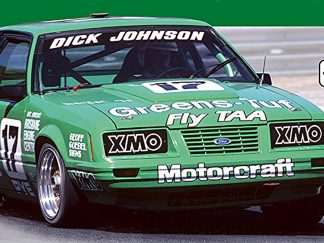