The official launch of the Supercars Gen3 platform had been eagerly anticipated by motorsport fans across the country and at Mount Panorama, as part of the season ending 2021 Repco Bathurst 1000, fans finally got to see first hand what the future cars of Australia’s premier motorsport category would look like.
While various images and videos had been released of the new Gen3 Supercars in varying stages of development prior to their completion, this was the first time that the general public had seen the new breed of Supercar completed and on track.
Moving on from the highly successful Gen2 Mustang which debuted in the championship in 2019, the move to Gen3 will see Ford stay with the Mustang body shape, albeit with a refined shape due to the new chassis.
With a preference from manufacturers to race 2 door sports cars, Supercars set about developing a new platform that was more suited to that style of body so the race cars would look more like their road going counterparts and would also be more efficient to build and repair.
Lowering the main roll cage hoop to achieve this was only one of a raft of changes made to the control chassis in the move from Gen2 to Gen3, which allows for more “OEM” style panels to be used on the cars. New engines are also a key feature of Gen3, with the Mustang upgrading to a race version of the 5.4L Ford Coyote DOHC V8 Engine after nearly 30 years of service from the existing power plant.
Authentic Collectables are very proud to present the Ford Performance Ford Mustang GT Gen3 Supercar in various scales, driven by Anton de Pasquale as part of the official launch at Mount Panorama on December 3, 2021. This is a Ford Official Licensed product complete with the iconic Ford Performance Gen3 launch livery.
This model is scheduled to be produced in die-cast with fully opening parts in a limited edition with a numbered Certificate of Authenticity. 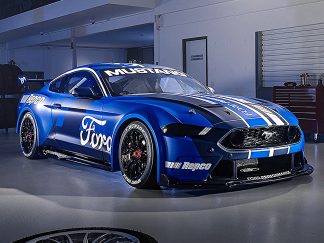